Rules of the Road When You Plan Bus Groups With Teens

So, you’ve agreed to plan a bus group with teens. Or maybe you’ve volunteered to be a chaperone. Besides setting you on the track to sainthood, being a chaperone means keeping tabs on kids, monitoring behavior, and making sure everyone on the bus stays safe.  You may also have to be a surrogate parent, mediator of disputes, and—should the need arise—a disciplinarian. 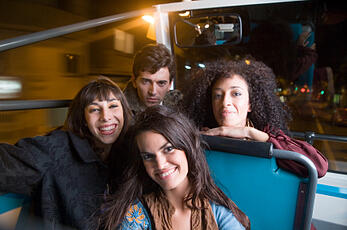 Keep in mind, the rules and expectations that apply to classroom behavior should also apply to behavior on the bus. Chaperones should be familiar with the code of conduct for the school or organization sponsoring the trip.

Put it in writing

Along with permission slips and medical emergency forms, it is a good idea to have students and their parents sign a contract specifying the code of conduct that will be observed during the trip—on and off the bus, at the event, in public, at the hotel, and so on. For example:

Have we forgotten anything? You bet we have. If you’ve ever raised a kid—or if you’ve ever been one—you know perfectly well that there’s no way to anticipate every possible behavioral infraction, every conceivable lapse in judgment. And frankly, we’d be hard pressed to find an idea so outrageous that no kid, anywhere, would dare to try it.

Do we really need to tell kids to exit the bus through a door, not a window? Is it actually necessary to make a rule against taking a nap in the upper luggage compartment? Must we explicitly prohibit snakes, reptiles, and other unauthorized passengers? The short answer is, “yes.”

But you can’t think of everything.

Therefore, before the trip begins, the trip leader should make it clear that the adults (driver and chaperones) are not required to justify, rationalize, or even explain their decisions. If they say a certain behavior or activity is unacceptable, it just is. The bus driver’s job is to transport your group from point A to point B; he or she has the right (and responsibility) to stop the bus if passengers are doing anything that could interfere with safe driving. Long before the bus doors close, it should be made explicit that the bus driver has the ultimate authority when it comes to matters of safety.

Teen passengers should never do anything to distract or disturb the driver. For most group trips, there is no prohibition against walking through the bus to switch seats, get a snack, or use the restroom. But students should stay seated whenever possible, and should return to their seats promptly if the bus driver or a chaperone tells them to.

Passengers should clean up after themselves, using the trash receptacles provided.

Students should respect one another’s space. There is plenty of room on modern motorcoaches for everyone to sit comfortably in his or her own seat. There is no reason to crowd another passenger or block anyone from moving through the aisle. If someone needs to get by, the passenger in the way should move.

Aisles should remain clear for walking and—on rare occasions—emergency evacuation. Luggage and personal items should be stowed in designated areas, not in the aisle.

At rest stops and meal stops, no one should be permitted to wander away from the group.  In public places—gas stations, restaurants, convenience stores and thelike—young people are expected to represent their school or organization with respectful and appropriate behavior. The buddy system works for kids of all ages, including teens.  Chaperones should take attendance each and every time the bus stops and starts.

In the unlikely event that a student must be sent home—because of a discipline problem, health issue, or other emergency—it is the responsibility of the organization or its chaperones (not the driver or bus company) to arrange for that to happen.

With a few basic rules and expectations in place before the trip begins, chaperones should be able to sit back, relax, and enjoy the ride.