Charter a Bus to Grand Rapids! 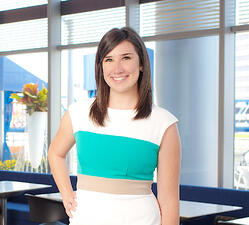 As the Director of Marketing for the Experience GR team, Kelly McGrail is your go-to when looking to charter a bus to Grand Rapids.

Grand Rapids has been earning a lot of attention lately. It was named Lonely Planet’s top U.S. travel destination for 2014. It’s been voted Beer City USA in two nationwide polls. And the city's annual ArtPrize event was the lone American representative on Time magazine's list of top five festivals in the world. Yet for all this acclaim, Grand Rapids still has the power to surprise visitors with unexpected delights. Check out the city’s clean, safe downtown — where more than 150 restaurants and shops, five museums and an assortment of nightclubs and performance venues are located within a 10-minute walk of five top-notch hotels. 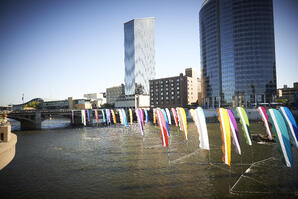 Every fall, downtown welcomes more than 1,500 artists and 400,000 visitors to ArtPrize, the world’s richest, most radically open art competition. Select ArtPrize pieces remain on permanent streetside display alongside dozens of other significant artworks – including La Grande Vitesse, the mammoth Alexander Calder sculpture that has come to symbolize the city’s artistic spirit. Downtown is also home to two excellent art museums, and of course there is the Frederik Meijer Gardens & Sculpture Park – one of the world’s 100 most-visited art museums – just a 10-minute drive away.

The culinary arts are also prominent in Grand Rapids. The city sits in the middle of one of the world’s finest growing regions, and local chefs take full advantage of the agricultural bounty. Visitors can pick their own produce at family farms or shop at dozens of farm markets – including the Downtown Market, a year-round purveyor of fresh ingredients and artisan foods.

Craft beers are another drawing card. The metro region is home to a “Beer City Ale Trail” of 30-plus craft breweries, including the world’s third-best brewery (Founders Brewing Company) and America’s best brewpub (HopCat).

Visitors can practice their shopping skills at two huge shopping malls – each surrounded by thriving commercial districts – as well as a bevy of neighborhood boutiques offering one-of-a-kind goods, often crafted by the artist whose name is on the door.

You certainly don’t have to leave the kids at home when you visit – Grand Rapids has been named the best place in America to raise a family, and opportunities for all-ages fun range from a classic urban zoo to a dedicated children’s museum. Minor-league baseball and ice hockey teams emphasize kid-friendly promotions, and the twice-yearly Meijer State Games of Michigan provide Olympics-style family entertainment. 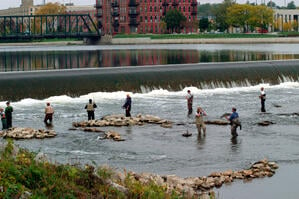 While Grand Rapids teems with big-city excitement, outdoor recreation is never far away. Fishermen cast their lines in downtown’s Grand River. Hundreds of miles of biking and hiking trails – and dozens of challenging golf courses – are within five minutes of downtown.

Just 30 minutes from downtown are the beaches and resort towns of Lake Michigan, named one of the world’s top 25 shorelines. Spend a day at the beach and a night on the Grand Rapids town – or vice versa!

To learn more about chartering a bus to Grand Rapids, please contact Mary Manier, Director of Sales at MManier@experienceGR.com or call 616-233-3554.