From the Driver's Seat to Manager: Richard Steward

Richard Steward started working for Indian Trails in August 2015 at their Kalamazoo garage location. A chef in a previous life, he was looking for a career that got him out of the kitchen and had a more traditional work schedule. While a bus driver’s schedule is not always the same at first, with seniority comes the ability to choose specific routes and schedules. This is how Richard ended up driving on the Western Michigan University campus toward the end of his career as a bus driver, with a set Monday-Friday schedule and more holidays off. 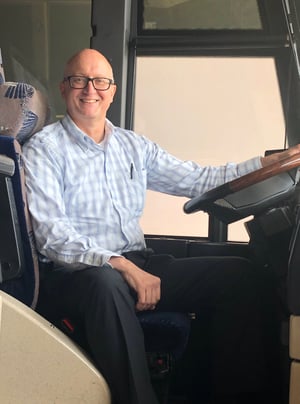 Now, Richard is the west Michigan area manager for Indian Trails. He started his new position in October 2018 after three years as a bus driver. His hard work and dedication as a driver made him stand out, and he was recommended for the position by the previous area manager. After going through the standard application process, Richard got the job.

At this time in Richard’s life, he wanted more control over his schedule; he and his wife just had a new baby. Indian Trails was able to offer him that control and schedule stability with this new position. Richard was able to be home more and on the road less. His new day-to-day activities consist of managing the cleaners who maintain the buses each night, occasionally helping to take care of drivers’ schedules, and training and retraining drivers.

From bus driver to trainer to area manager, all of his roles brought different challenges and responsibilities but were enjoyable and rewarding. Being a driver was fun and exciting as he got to be on the road, traveling to different places. Richard is not originally from Michigan, so driving allowed him to learn more about the state and see new places. As a trainer, he is able to positively impact newer drivers and show them the ways of the road as a senior driver. In his new area manager position, he says that every day is challenging, but also rewarding. With less than a year under his belt, he is still learning about the company from this new position and how the transportation industry works in general.

The biggest differences Richard notices are less travel and less interaction with customers. During his time as a bus driver, he enjoyed interacting with students while on campus, as well as the other bus drivers. He also misses the traveling and being out and about every day. Richard mentioned being a bus driver made for long days, and moving to a desk job takes some adjustment in your schedule. He is still trying to get into a groove with this change.

Richard has thoroughly enjoyed his time and responsibilities at Indian Trails, which he believes can be attributed to the history of Indian Trails as a company. Being family-owned and operated for over 100 years stands out to Richard and is key in what makes this company great. He has found that Indian Trails is well-respected in the community, and he is proud to highlight their commitment to safety and the latest and greatest equipment. He likes the fact that their buses traveling down the road are pretty to look at. Most importantly, he likes the people he works with, that are both in positions higher and lower than him.

When asked what he would like to tell someone interested in becoming a bus driver, Richard wanted people to know that it isn’t an easy job, but every day is fun and comes with adventure. Being out and about, at different places at different times, makes every day unique and exciting. Although there are opportunities to move up, which Richard was able to take advantage of, they don’t come often, and they require patience. Indian Trails is a stable company that strives to bring in long-term employees. For that reason, openings for managerial positions like Richard’s don’t come every day. But with hard-work, dedication and patience, bus drivers gain opportunities to make more money, and have more control of their routes and schedules.